I’ve spent the past few days scouring my art books in search one specific artist. I recalled seeing his fantastic landscapes that seemed so desolate, jet full of energy. In this world, Greco/Roman-styled buildings stood solitary with shadows that stretched all the way across the painting.  I wanted these to be the inspiration for the world of the Tarot. After quite a bit of time, I finally found what I was searching for: the art of Giorgio de Chirico. 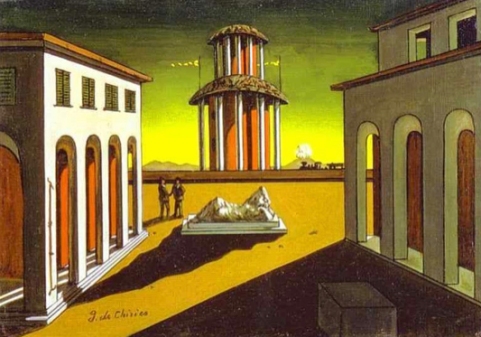 Piazza d’Italia circa 1956. This painting is exactly what I picture a dreamscape to look like. On the surface it looks simple and straightforward, but then I start to wonder. What is that train doing in the background? Who are those two people talking?

Technically, de Chirico wasn’t a surrealist. He worked with some of the artists at that time, but he art was more symbolic and used dream imagery. This is what drew me to him.

La Torre Rosa 1913. This was painted during de Chirico’s stint in Paris. You can see the long shadows that characterized his work.

Giorgio de Chirico was born in Volos, a town in Greece on July 10, 1888. When his father died in 1905, the family moved to Munich. At the age of seventeen, de Chirico studied at the Academy of Fine Arts where he was introduced to the ideas of Nietzche. De Chirico also found inspiration in the European Symbolist artists like Franz Stuck and Carlos Schwabe. De Chirico loved their use of dream-like imagery. His earliest paintings used Symbolist ideas with his love of Greece and Italian antiquities. His paintings also represented his musings on the true nature of reality.

La Grande Torre 1919. Again, this tower seems so simple on the surface, but the depth of the shadows draws me in. What lives inside that tower?

After settling in Florence, de Chirico traveled to Paris in 1911. There he met a number of avant-garde artists and writers, including Pablo Picasso and Constantin Brancusi. He also exhibited his work to the public. It was during this time (1911-15) that De Chirico created many of his most influential paintings such as “The Mystery and Melancholy of a Street” (1914). His paintings showed scenes with classical architecture where only a single lone figure or monument was present. Often long shadows hinted at other elements or figures just out of view. This creates an unsettling mood. 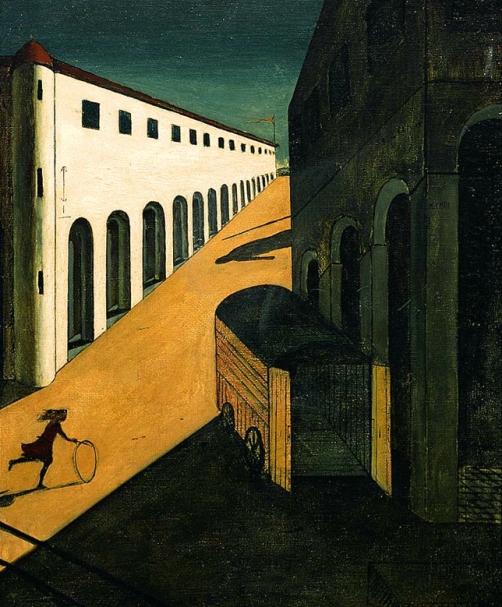 Mystery and Melancholy of a Street 1914. This is one of de Chirico’s most famous paintings. Notice the shadows of two figures just out of view. That creates an unsettling image for me as my mind desperately wonders who or what they are.

The Great War (World War I) forced de Chirico and his brother into the Italian Army in 1915. De Chirico was stationed in Ferrara, but soon had a nervous breakdown and recouped in a military hospital. In 1917, he met artist Carlo Carrà, who helped him create his style of “metaphysical painting” that emphasized the hidden significance of ordinary places and objects. 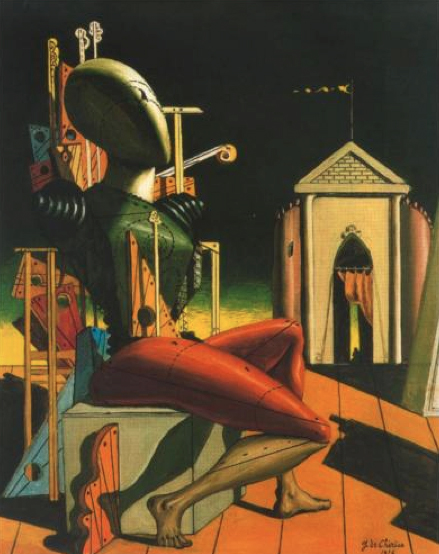 The Predictor 1919. Landscapes weren’t the only subject de Chirico painted. He often included these mannequin creatures with oblong blank heads.

De Chirico and Carlo Carrà created a style known as Pittura Metafisica. This type of painting showed recognizable items, but displayed in an unusual manner. De Chirico created city squares with arcades and distant walls. The scenes were dominated by classical statues or his metaphysical mannequins, which were derived from tailor’s dummies. Sometimes, these figures were the only “human” presence in the painting. 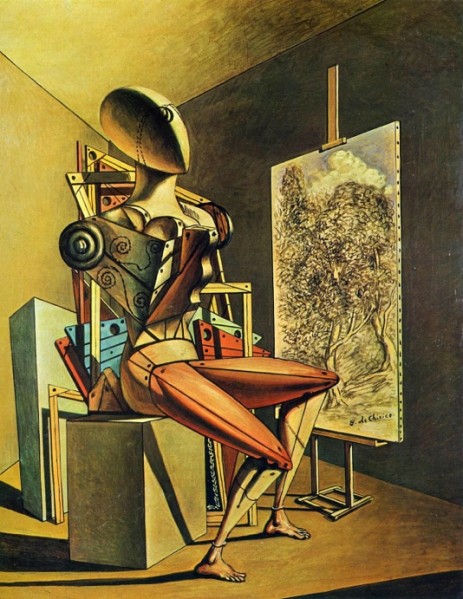 This painting of a mannequin draws me in, yet I cannot find the title or the year it was painted. I see de Chirico’s signature on the painting. I know that there were some paintings created by other artists with his signature and this might be one. However the cubist shape of this mannequin is compelling.

De Chirico developed this technique from his readings of of the German philosophers Friedrich Nietzsche, Arthur Schopenhauer and Otto Weininger. He became interested in Nietzche’s idea of the eternal return and the circularity of time. In this philosophy, true reality was always hidden behind the reality of appearances and visible only to the ‘clearsighted’ at enigmatic moments. De Chirico wanted to unmask reality and show the mystery that lay underneath.

Visite aux Bains mystérieux I, 1935. This is perhaps the most surreal of de Chirico’s paintings. I wonder what happens inside that tiny building? Is it more than just a changing room?

What mystery lies beneath the surface of our reality? De Chirico sought to find it through his painting. His work encourages us to look deeper and see beyond the obvious. We are all seekers of the truth.

It doesn’t matter what sort of art you take up—writing, painting, music, cooking—you need to dig deep into whatever hurt you have. If not, then the art will be false and flimsy.

Salvador Dali pondering how to make himself insane in the office of Dr. Sigmund Freud from the film “The Death of Salvador Dali.”

I was watching the Next Food Network Star. On one episode, a contestant opened up about how he lived his childhood scavenging from garbage cans. This not only moved me, it showed how authentic he was. Another contestant would not open up. She obviously had some sort of hurt in the past. One that had shaped her way of thinking, yet she was afraid of going to that dark place. On that episode she was eliminated. Why? Because she didn’t connect with the viewers.

Be authentic with your art. If it doesn’t hurt, then you’re not doing it right. When you dig into your inner self, it’s like therapy. Only art comes out the other end. If you’re not willing to be brutally honest with yourself, then your work will feel false. It’s like the difference between a museum painting and a hotel painting. They both contain skill, but only one has passion.

Salvador Dali once toured a museum of paintings. After viewing them all, a reporter asked him which one he liked the most. Dali pointed at a door, freshly painted and still wet. He said there was more skill and passion in that door than any of the other paintings.