Most of us these days can tout the benefits of coffee, from a ward against cancer to a way to make yourself more productive. But we aren’t blind. We know that too much coffee, and caffeine, can make your stomach upset and and keep you up at night. Yet can this drink kill you? Advertisers a century ago would have people believe just that.

I could only find a photo of Instant Postum (from 1911)

In 1895, Postum created Postum Coffee Food (yes, that was the name). It was roasted cereal with a molasses glaze. How the heck did this imitator kick coffee’s butt? Advertising. Mr. Post (yes the fella behind Grapenuts) knew how advertise. He culled together all the negative aspects of coffee and went hyperbole on them.

This add touts that coffee slowly destroys your stomach and nerves. Okay, this is reasonable. I don’t know if roasted cereal is any better. 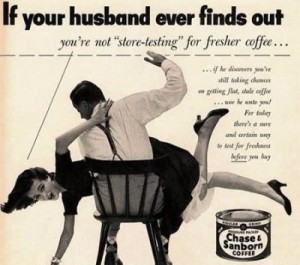 Okay, this one wasn’t for Postum, but I thought is was great. If you choose the wrong coffee, you get a spanking. Bad, bad wife.

The Postum Food Coffee diminished after the government truth in advertising pointed out that roasted cereal wasn’t, and never will be, coffee. Finally,  in 1911, Coca Cola went to trial over its product being a “killer brain tonic”. The main focus was caffeine. When Coca Cola won this case, it brought coffee back into focus. It also helped  that coffee folks learned to advertise.

4 comments on “Don’t Drink That Coffee. It Can Kill You. (Maybe)”