Throughout 2011, an anonymous artist created unique sculptures from books and deposited them throughout Edinburgh. Each came with a tag addressed to a Twitter alias. The whole thing was a mystery. The Edinburgh Evening News claimed it had identified the mysterious artist, but a poll revealed that the public wanted the artist to remain anonymous.

The first sculpture delivered was named “The Poetree” after Librarian Julie Johnston discovered it in the Scottish Poetry Library. At the base is a broken egg with words from Edwin Morgan’s poem, “A Trace of Wings.”

This sculpture is crafted from a copy of Ian Rankin’s Exit Music. The tag read: “For @natlibscot – A gift in support of libraries, books, words, ideas….. (& against their exit).”

This sculpture includes a a tag that reads: “By leaves we live.” The cup on the top has a swirl of words that reads: “Nothing beats a nice cup of tea (or coffee) and a really good BOOK”. Finally, the tray near the cupcake reads: “Except maybe a cake as well”. 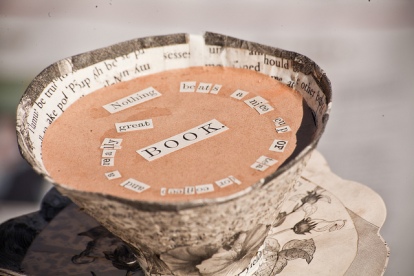 The artist was able to craft sculptures with amazing detail like these feathers. This is part of a hat shaped like a bird’s wing.

For more on these amazing works of art read the article by The List or on the Central Station. 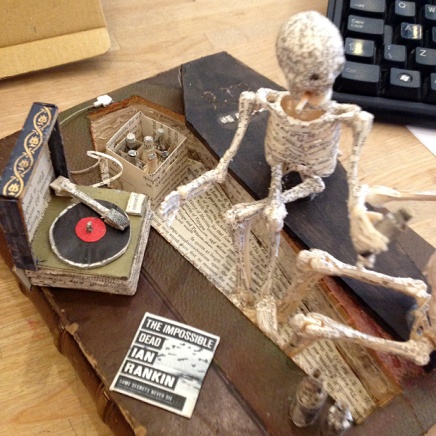