Ok, I’m a comic book geek through and through. Out of the current 594 issues of Fantastic Four, I own 576. So needless to say, a lot of my thought processes get filtered through the comic book viewpoint.

Two recent events got me thinking about the Fantastic Four again. The first was starting school. Last week, 31 new students began their sixth grade career with me as their teacher. I always conduct a team building exercise to highlight important character traits. You know, honesty, organization—things that will help them in life.

The other event (that always seems to occur the same week as school) was the San Diego Comic Con. I haven’t gone every year, but I’ve certainly racked up my share. Plus, I started attending in the 1970s back when it was still relatively dinky. I do know my way around an exhibition hall.

My mind went to work to link these two concepts together—instilling good character in pre-teens and a convention floor crammed with 150,000 pop culture nerds (like me). The resulting pastiche was an idea to base character traits on the Fantastic Four. 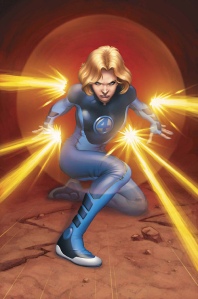 Invisible Woman
She represents teamwork. Think about it. She turns invisible. No one knows where she’ll be. If she doesn’t stick to the plan, her teammates will bash into her or knock her down.

As a writer, teamwork is crucial to success. Only recently did I join professional writing groups. Before that, I pretty much wrote in isolation. It was natural for me. I was an only child and was used to working alone.

A professional critique group raised me up to a whole different level of writing. But you can’t approach this venture selfishly. A critique group is reciprocal process. You have to put everything in. You can’t always be thinking about your own work. I often find I learn how to be a better writer by striving to improve the work of my fellow scribblers. And that’s the essence of teamwork. 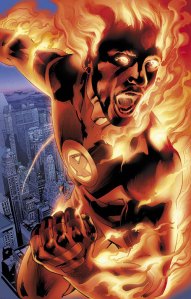 The Human Torch
Definitely courage. This is a no-brainer. Johnny Storm is a hot head. He often rushes into the fray without thinking. Yet, he never holds back. A trait that wins many battles. But is also got him killed in issue 587. (Maybe he’s dead. Nothing is permanent in comics.)

This is a quality every writer needs. When you put together that manuscript, don’t hold back. Peel back your soul and dredge up every bit of nasty that lurks inside. Take a risk. That’s the only way to write deadly honest prose. 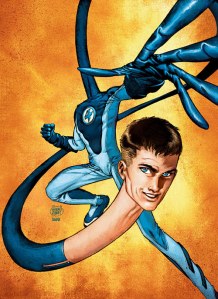 Mr. Fantastic
The epitome of Reason. Yes he has the power of super stretchiness. However, most of the time he defeats his villains through a well conceived plan (which often includes building a machine).

As a writer, organization is key. Plan your scenes before you write. Set up a character bible so you get the details right throughout the story.

But reason is more than simply thinking ahead. Mr. Fantastic can stretch to attack an opponent from any direction. Working on those tough points in your manuscript are the same. Bashing your head against a blank computer screen will get you nowhere. Think. How you can get at the story from a different direction? Maybe take a break. Switch locales. Go old school with a notepad and a pen. Whatever works to crack that blank page open and get the words flowing again.

The Thing
Persistence. Period.
This is my all time, favorite character. No other super hero personifies persistence like this man. I mean he gets stuck with the ugliest mug in all of comicdom, yet he never gives up. Yes, the Hulk outclasses him in strength every time. This won’t stop Ben Grimm. He keeps up the fight until there’s nothing left.

Persistence is every writer’s secret weapon. I mean we aren’t actors or models who will lose our good looks. Or athletes that have to worry about strained muscles and the ravages of time. We can write until the Grim Reaper knocks on our door. Take my good friend, Chet Cunningham. He’s written 400 plus books. His eyes are going, so he has to use a magnifying glass to see his computer screen. Yet he still churns out the books (usually two or three a year).

Yes you’ll get more rejections than acceptances as a writer. Your critique group, though helpful, won’t be all smiles and sunshine. If they’re good, they’ll tear your sentences apart.

But you need to keep going.

This is what separates wannabes from real writers. Butt to chair. Keep writing. No matter what.