Who knew vanity could have such a backlash. I’ve always felt mirrors held another world (very Through the Looking Glass of me). As a kid I pressed my face up to the glass, wondering if I could push through.

Then I chanced upon the Fish anthology, which offered a chance to realize these dreams (even if in flash fiction form). The goal of the book is creating a dream-like world where surreal and literary collide. No genre limitations, just a single theme: Fish. That’s a slippery topic. 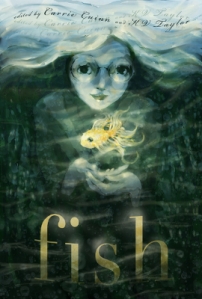 My story concerns a gentleman who’s a little too obsessed with his own reflection, even to the point of ignoring his lovely wife. His reflections morphs, becoming fish-like. It’s intentions are not so pleasant. THe glass cracks and as the fish creature attempts to burst through.

I was inspired by a myth read in Imaginary Beings by Borges concerning how fish plan to take over the world, through mirrors. Check out this excerpt from the myth.

“Both kingdoms, the specular and the human, lived in harmony; you could come and go through mirrors. One night the mirror people invaded the earth. Their power was great, but at the end of bloody warfare the magic arts of the Yellow Emperor prevailed. He repulsed the invaders, imprisoned them in their mirrors, and forced on them the task of repeating, as though in a kind of dream, all the actions of men. He stripped them of their power and of their forms and reduced them to mere slavish reflections. Nonetheless, a day will come when the magic spell will be shaken off. The first to awaken will be the Fish.”

You have to know yourself as a reader. Which type of fiction do you lean toward? Knowing the different kinds of fiction can certainly help. I get totally into this—my Master’s thesis being on genre studies. But I’ll save wordy for a doctoral thesis and give you the reader’s perspective.

Realistic or Literary Fiction
These are the books that deal with real life. They’re usually called literary fiction in bookstores, but I also lump in realistic fiction, because that applies better to young adult books. Basically these books focus more on characters and their personal problems over plot. There is a line that divides literary form realistic. Literary can often be very self-absorbed and even be devoid of plot. Realistic fiction typically has some semblance of a problem and resolution.

Some good examples (pulled from my favs) are:

Genre
These books are defined by their plot structures. Characters can be secondary and will sometimes follow stereotypes. Readers return to these books because we know what to expect. Certain situations and settings reoccur over and over. There are many different types of genres, such as: Science Fiction, Fantasy, Horror, Thriller, Romance, and Mystery.

Genre Pastiche
This is where things get interesting. Since the 1980s, films had run the gamut of genre and began mashing them up. Books are doing the same. One of the most popular pastiches is paranormal romance (horror and romance). This allows readers who love genre, to mix things up.

Next time you look for a good read, think about the type of read you are. Choose your book based on your tastes. If you have a writing bent, then check out how to write for each genre.