I recently saw in the news that librarians in the African city of Timbuktu are stashing away ancient books to prevent rebels from looting and burning them. Just think about it. These folks are putting their lives at risk for books. That’s awesome. 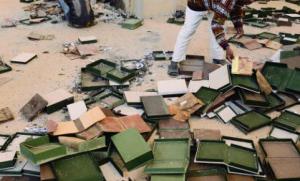 I nabbed this photo from Arab News. Click on the picture to view their article.

For those of you who don’t know (and I was one of them) Timbuktu is dead center in Mali. 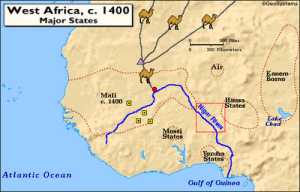 This area has a long tradition of hiding texts. People first hid early Islamic works from Moroccans, then the Europeans. So these folk know what they’re doing. The main library that’s been affects is the Ahmed Baba Institute. It houses all sorts of delicate, museum quality text.

Don’t know who Ahmed Baba is? Neither did I. This fella is the greatest medieval West African writers. He lived from 1556 to 1627, making him a contemporary to Shakespeare (though he didn’t get to run a playhouse). He was a major scholar in the Songhai Empire, which ruled most of West Africa. Too bad that the Arabs rushed in and destroyed the empire, imprisoning all the teachers, including this fella. After everyone, I mean everyone, petitioned for his release, Ahmed Baba was able to head back to Timbuktu. Check out his picture.

I’m sorry, but when I look at this, only one thing comes to mind.

Just like the character Jules (at the end of the flick), Ahmed Baba was soft spoken and gave credit to the Almighty. It seems the current librarians in Timbuktu are taking a cue and busting some ass to protect priceless works of literature.