Okay, so I’m not really taking about a flesh and blood baby here. But if you’re a writer, you will understand. I had to abandon a novel I was working on for nearly three years. I dropped it cold. One day, revising a chapter. The next. Gone. 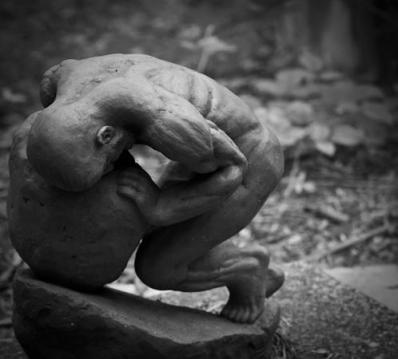 I felt strange. A piece of writing, especially something of novel length, does feel like a child. You give birth to it, and watch it grow. In the case of this novel, I’d started it time and time again over the course of two years. Then, using the NaNoWriMo month of November, I plowed through and completed a whole draft.

That wasn’t the way I was used to writing. I like chapters to come off polished and clean, not all ragged and error filled. Yes, I did have 50,000 words. But that was not a story.

That was one year ago. I took up the job of revising it and found that I was starting from scratch again. A few of the plot ideas from the writing marathon remained, but mostly, I had to trash it all and start over, yet again.

Dragging my butt over to the keyboard became harder and harder. I found plenty of excuses. Yet I still wrote. I’m not a quitter. It just felt like rolling a rock uphill. Every time I sat down, I’d only made inches of progress. (Just call me Sisyphus).

Then I had an opportunity to revise a former novel. My agent wanted to know if there were any changed before going for a second round with publishers. The difference in my writing was ridiculous. I yearned to write. I pushed myself to crazy limits to totally revamp and revise that writing.

That’s when I realized that the unfinished novel had to go. The passion wasn’t there anymore.

And so I left it, like the Spartans do with their babies, to fend for itself. Parts of the old writing will live on in my imagination. I know I’ll cannibalize scenes and ideas. That’s what writers do. But I will never take up that novel again.

The current novel, started the same day the old one was abandoned, and it is going swimmingly.

One comment on “I Abandoned My Baby to Die”