I’ve been attending the San Diego International Comic Con since it was just a local shindig that peddled actual comics. Now the convention sprawls all over the convention center, pulling more Hollywood bigwigs than actual comic collectors.

Rarely do I attend the panels. The last one I did see was for the cast of Buffy the Vampire Slayer (TV show). This was probably the second or third season. Way before they became uber-popular. The cast looked shocked when folks asked questions like: Who do you think would win in a fight: The Thing or the Hulk? (Seth Green was the only one to sport an answer).

Now, these panels are an experiment in frustration. The lines are ridiculously long and that doesn’t even guarantee a seat. Plus, everything is streamed live to the web. Why not Goggle it? You’ll get a better view and not have to wait for eight hours (no exaggeration). 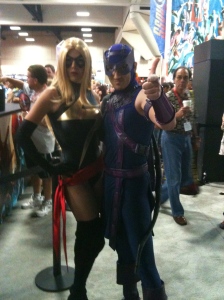 I content myself with hitting the exhibition floor. What follows are some tips that may help you navigate the crowds and survive the tumult that is Comic Con.

Bring a Suitcase
If you’re like me, you come to shop. The geeker the shopper, the bulkier the purchases. (That Galactus figure won’t fit in the overhead storage compartment.) When the day is over, you’ll need to haul all this swag back to your car or hotel, which is most likely many blocks away. Did I mention that this convention happens in July in San Diego? The heat and humidity conspire to make each passing Klingon smell like an actual Klingon. So a suitcase with wheels will really come in handy.

Don’t Bring a Suitcase
Those wonderful security folk who man the doors won’t let you on the exhibition floor with your rolling suitcase. So now you’re saying: “Why the heck did you make me tote this suitcase down here anyway?” I can answer that in two words: Coat Check. There are multiple locations where you can store your suitcase for the day. They cost a few bucks (so bring some singles), but it’s well worth it. Often I return and stuff my suitcase with swag before launching back into the exhibition hall. It costs each time you pull your suitcase out, but it’s worth every penny. Just don’t lose your slip, or you won’t get your luggage back.

Deodorize
Comic Con is funky on many levels. Mostly it has the unwashed comic geek, fresh from his basement lair. And all these folks are crammed into narrow aisles. Douse yourself with something that smells nice. Seriously. I often walk through clouds of stink as I traverse the halls.

Bring Snacks
Yes, there are vendors selling food, but it’s overpriced and the lines are long. (I once saw a line that stretched fifty yards. I was convinced this was some famous person doing a signing. Nope, just the line to Starbucks.) Throw some snacks in a backpack and much as you go. When it’s lunch time, I’d forge into downtown San Diego rather than eat the convention fare. You have less crowds and better eats.

Take Plenty of Pictures
The best part of Con are the folks in costume. I once saw a group dressed exactly like the cast from Indiana Jones, The Last Crusade (they even had one fella dressed up like the old knight). Or then there was the fully functional Transformer costumes. I’ve found that the best place to see and photograph these folks are in the main hall right outside the exhibition hall. It’s less crowded there and you’re able to snap a photo. Don’t be shy. These people want to be photographed (otherwise they wouldn’t dress up). Just ask politely.

Costumes from the Last Crusade

Good luck folks and remember, your poster tube is not a lance. Please don’t stab me with it.