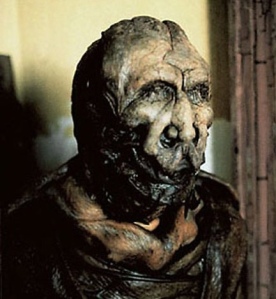 On of the creepiest movies I’ve seen is Mimic. Here, mutated cockroaches transform into people hunting predators in the New York subway. Their adaptations to hunt humans is amazing. Down to mimicking our speech and silhouette.

Now it looks like this sort of adaptation could be happening for real (albeit on a much less deadly level). It appears that packs of wild dogs have taken over the subway system of Moscow. The alphas are chosen not by superior might, but by cleverness. These canines can sense which humans will dole out food. A good tactic considering some Muscovites take to stabbing the dogs.

These dogs also travel the subway, expanding they’re begging territory. They recognize familiar scents of certain stops, as well as the names the conductor uses.

Who knows, maybe these dogs will develop pick pocketing abilities. Or will they start taking down weak or young Muscovites? The stray dog population has been escalating since the mid 1800s. That’s plenty of time to breed in some new behaviors.

3 comments on “Stray Dogs Take Over the Subway”