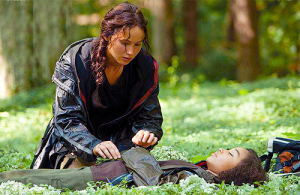 Often people complain that a movie is nothing like the book. Well of course. A movie unspools images whereas a book delivers content through some 70-100 words. It takes me the better part of a week to finish a book, but only two hours to see the average movie. Given the condensed medium of film, there’s no way to include everything that appears in a book. And no need to really.

There are advantages to each media. A smart filmmaker will realize this and utilize the unique qualities of film to not only condense sections of the book, but also highlight others. If you haven’t read or seen the Hunger Games book or film, you may find sections spoiled.

The movie zoomed through the opening chapters of Hunger Games at light speed. I think they did this to allow them to spend more time on the actual arena combat. Many of the thoughts that Catniss used to express backstory or her attitudes could not transfer to film. For example, her whole story about saving the cat and Prim’s love for it was condensed to a single line: “I’ll still cook you.”

One element I felt they didn’t communicate well was the matter of names and the reaping. The film established that Galen had his name in 42 times, but didn’t go into putting your name in extra times to get food. My guess is that the filmmakers felt this wasn’t as crucial and viewers would get the concept as the film went on. It certainly didn’t bother me.

Rather than put the entire backstory of Peta and the bread and Mom’s zoning out at the start, the film smartly incorporated these into tiny flashbacks. The best was during the tracker jacker delirium scene where Catniss remembered how her dad died and Mom tuned out.

The film also solved a few problems I had with the book. I noticed that Suzanne Collins was one of the screenwriters, so perhaps she took a second look at her material. First, the fact that she never mentioned the position of cameras at any time in the novel really bugged me. It go so that I couldn’t focus on the story. The film handled this with one scene. Catniss climbs a tree and a knot twists to look at her. That one moment alone told us that everything could be a camera.

Also, the novel had a conspiracy plot at the end that felt tacked on. The film provided cut-away scenes with the gamemaker and President Snow that expertly delivered this same feeling without distracting from the plot. The best part of this was the final scene with the gamemaker. The key to films is what they can deliver with a single image. The gamemaker is led to a room and locked in. A bowl with berries (the same that Catniss nearly swallowed to poison herself) were presented on a table. The message was clear. He screwed up and was expected to pay the price. This also underscored the tyranny of the Capitol’s regime.

The film added many scenes showing the gamemaker designing and running the game. This really helped me understand how the arena functioned. I liked seeing them comment on the tracker jackers as well as seeing the dogs being designed. (I didn’t miss that the dogs were former contestants as this bothered me in the book.) One of the best added scenes was the riot in District 11. I know the book was explicit about cutting the scene where Catniss added flowers to Rue’s body so that viewers wouldn’t see it. However, I liked seeing the riots in District 11 and the subsequent put down.

The last element that the film added is a technique I saw before in Green Mile: The Song. Catniss sings a song to Prim at the beginning. I knew right away this would be the same song she’d sing to Rue. It served to create an emotional connection between Catniss’s little sister, and her adopted ward, Rue, in the game.

The next time someone whines about how badly films adapt books, explain to them that a film is not a book. Stories you read and the action unfolds in your mind. The film shows you the action, so it will never match the images in you head.