As this Inktober has progressed, I find myself leaning more and more toward American Traditional style for inking. For this week’s spread it’s most evident in the final day (Saturday). 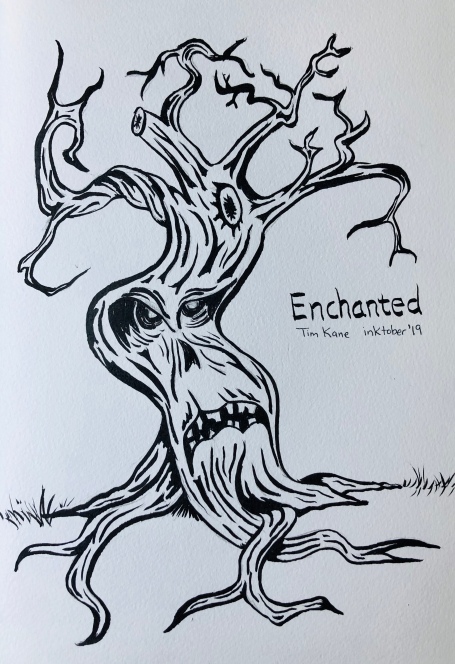 For October 7th, I really wanted to create an evil tree (as if lifted from Snow White). I spent plenty of time searching up different gnarled trees and combined the best into Mr. Woodsy here. 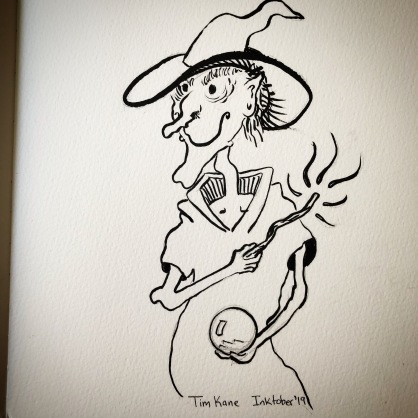 I wanted to still keep things creepy (It is October after all), so I went for a bone-thin witch for the “Frail” theme of October 8th. 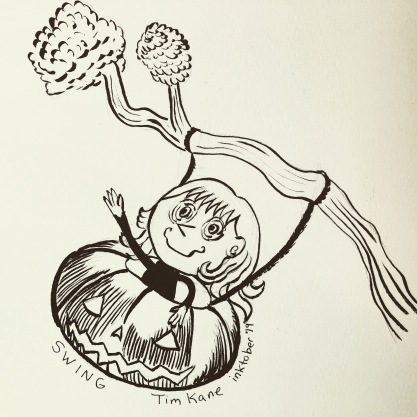 I’m still searching for just the right image to use for Pammy and wanted to try something a little more cute. The jury is out, but I love the pumpkin shading. This is for October 9th theme of “Swing.” 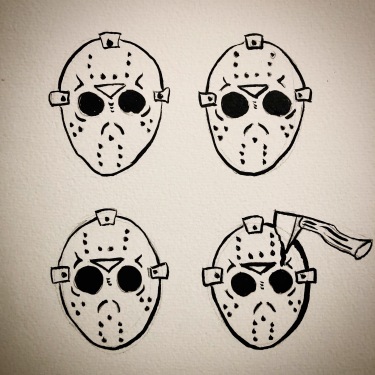 I had really wanted to do a tessellation for the theme of “Pattern” on October 10th, but after an hour fiddling with cut paper, I cut bait and went with my daughter’s suggestion of Jason’s mask. 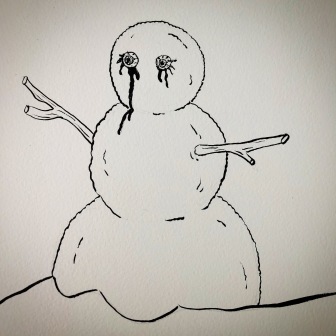 October 11th’s “Snow” theme was a rushed one (I’ve just started teaching second quarter and have been pooped). But I enjoyed shoving real severed eyeballs into the snowman. 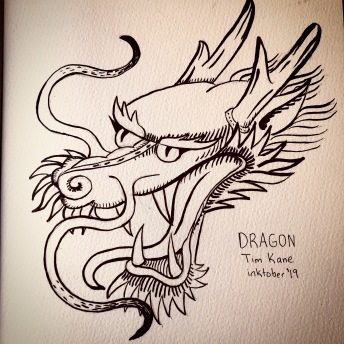 For “Dragon” this is where I really started channeling my inner tattoo artist. I love how the brush pen creates bold lines. I can’t really shade (or use color) but the outline feels strong the way I needed it to be. 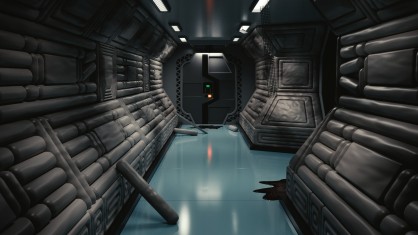 My story, Deadlock, has just been published by Ripples in Space. I originally wrote this for a contest titled “Monsters in Space” but by the time I was ready to send it in, the window closed (I didn’t miss the deadline so much as they filled up early). Here was my dilemma, I needed to use a classic monster (vampire, zombie, mummy, etc) to chase some poor schleps in space. As I chewed this over in my mind, I kept circling back to Alien and how the Xenomorph terrorizes Ripley. Of course I don’t use a Xenomorph, but there is a classic Hollywood monster involved. I decided to pick a realistic space monster (no Jason in Space for me) because I thought I might need to send it out to other venues (which, in fact, I did).

The key to this story is the standoff, the deadlock, between the monster and the final girl. Neither can kill each other because… Well, that’s the twist, right. I can’t spoil that. But if you like classic monsters, and certainly if you dig Alien, check it out. (Scroll down the page and look for Tim Kane or Deadlock).

This is my first year charging through the categories of Inktober. If you’ve never tried this, the gist is, you compose a drawing, always in ink, around some prompt. Yet the prompts sometimes seem a little broad, and, let’s face it, not always creepy. I’m looking at you, Husky. 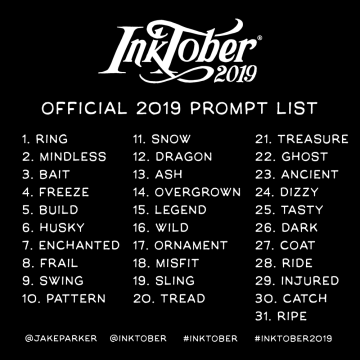 This is October, after all. Strange and creepy are in the air. So my goal was to craft something creepy from each post. Now mind you, I missed day one (didn’t even know about this event). So my drawing pick up on day two. 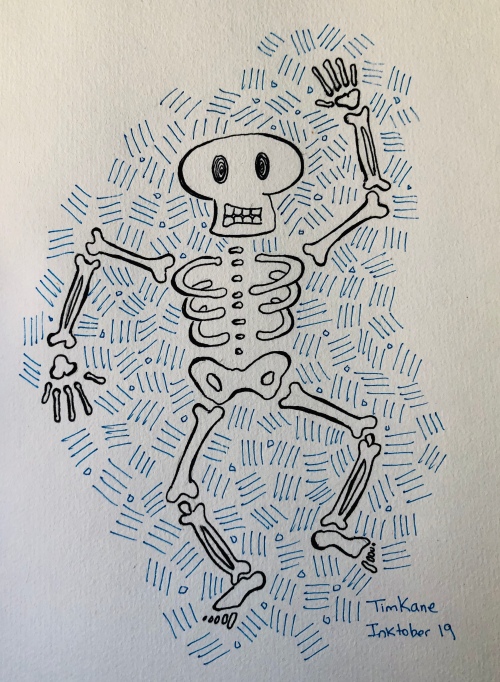 For “Mindless” I just wanted to draw a skeleton. It doesn’t really match the prompt, but you could say he’s mindless in the way he dances (a stretch, I know). 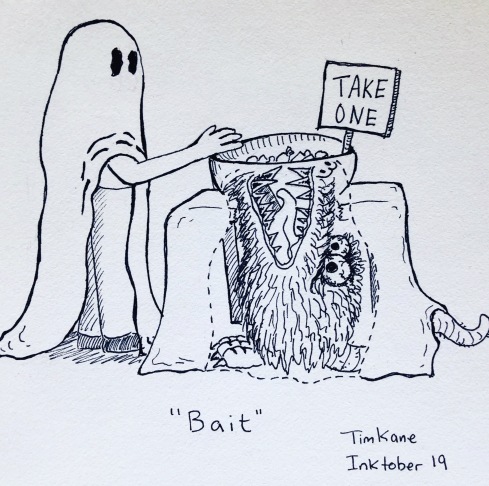 For “Bait” I wanted the classic “don’t put your hand in there” candy scenario. In this case, the candy is the bait and the child is the prey. 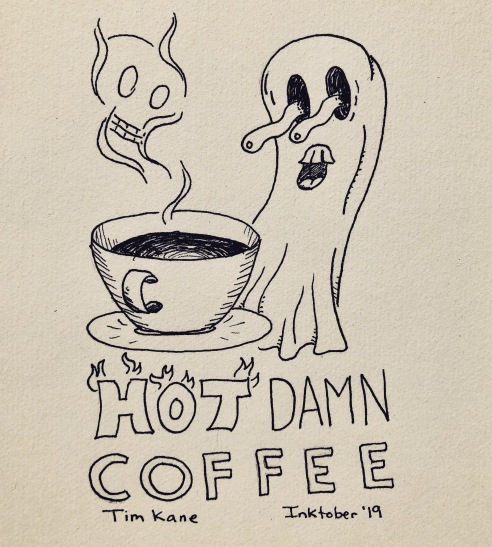 I’ll admit, I didn’t adhere to the prompt on “Freeze.” In fact, I went the opposite direction. I so wanted to draw a cup of coffee. But I made up with two posts for “Build”. 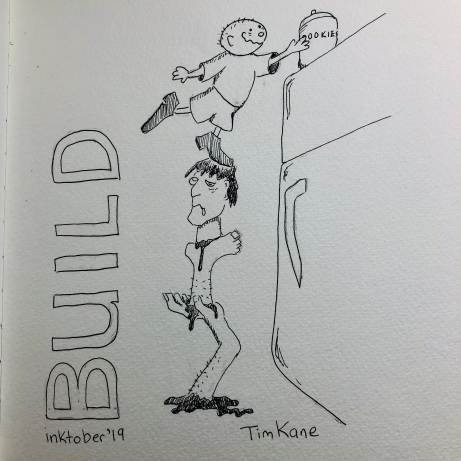 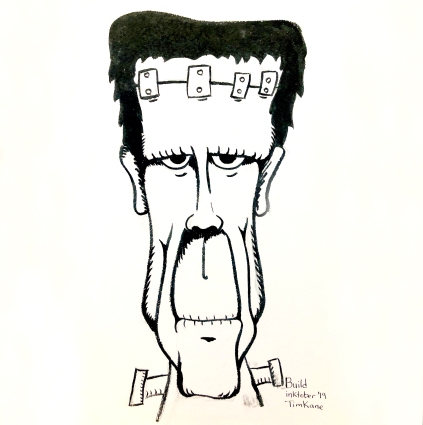 For the Frankenstein, I had just secured a brush pen and wanted to try it out (thus the more obvious “Build” link). But for the cookie jar, I wondered what creepy things a kid could stack to get to the jar (and yes, he got the cookie). It’s all about thinking… what could I do to make this more creepy. 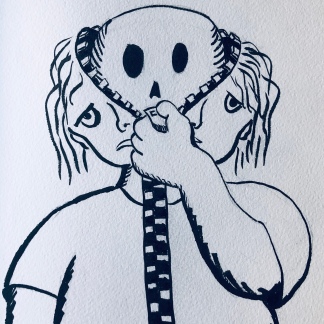 Every other”Husky” I saw all involved dogs. Which is fine. But there’s also another meaning to husky, as in thick bodied. (I am also a word nerd). So I thought of this phrase: Sometimes you need to zip up a husky outer layer to keep the chill from your bones” and voila, a creepy post for the word husky.

Here’s hoping I can keep up the weirdness for the remaining posts.